It was another full day of practicing retirement from the time Lilly got us up at 7:30 until now at 9:45PM. We did our coffee and blog reads to start off with~ then had breakfast and eventually got around to packing up and getting "Ossumer" on the road for a short 1.5 hr run to Barneys Island to the Cranberry Campground. We actually took about an hour to set up for some reason in the past it was like a marathon setting up we now do the jacks, water, power, dog pens and mats and then have a sit down in the lawn chairs for a bit before going in to run out the slides, turn the seats etc. Then sit for a bit again and maybe have a coffee then set up the satellite might want the TV tonight.You get the picture this is practicing for retirement there is no rush anymore. Life is Good.
We took a drive out to Big Island late this afternoon its called an island but is really connected to the main land by a narrow sand bar that has a road built on top of . Nice drive and lots a nice scenery. 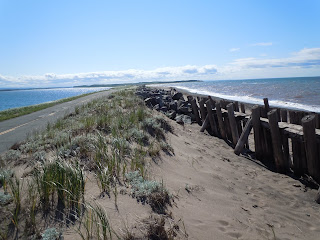 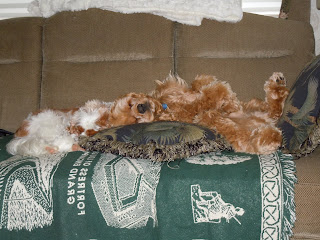 Cranberry Campground http://cranberrycampground.ca/ is a first visit for us and its not too bad a place but still a work in progress, good WiFi and good cell service all 50amp, nice view of Barneys River, gravel roads, and fair size grass lots. 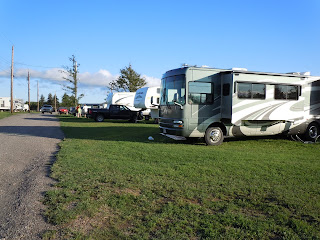 "Ossumer" at Cranberry Campground in Barney's Island NS
Its off to Cape Breton Island tomorrow with about a 2.5 hr drive ~have to be on the road early no later than 11:30am its all part of the practicing. Cousins came to visit that live in the area so we had a nice 'catch-up"...On the way back from Big Island we took a run into New Glasgow and pick up some groceries ~wow its been a busy day!!
Until the next time stay safe and have fun.
"Home is where you park it."
Elaine Rick Lilly and Tucker
Posted by Rick and Elaine NB at 10:30 PM