Yeah Mr. Fix It did a good job the slide came in this morning.

We had a great run from Fishkill to Harrisburg PA today. Our purpose for stopping in Harrisburg was to go to "Speedco" and have the oil changed in Ossumer and get all the fluids checked and topped up. A short hop off the freeway and we were there. We received the best 'customer service' we have had in a long time. They changed the oil, checked the tires and air pressure, performed an analysis on the oil they drained out (it was all good)...changed the filters, they even washed everywhere they touched so as not to leave greasy hand marks any where. And they were all entertaining to boot..Ossumer drank back 24 quarts of Rotella oil..boy was he thirsty. All for the excellent pricing of $202.00-it would cost us double that back home. So if your in the Harrisburg area and need an oil change thats where you need to go. Everyone felt like family by the time we left. ( I figure thats the equivalent of 2 - 24's of beer back home the quantity of oil not the pricing! Ha) There were big tractors in and out of there the whole time we were being serviced. Here we are parked up in the Speedco bay with the big boys. 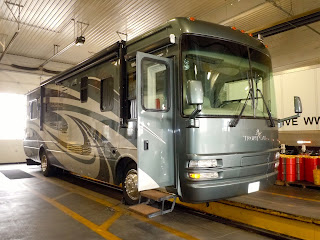 and of course Mr. Fix It had to get in on the act. They even provided him a hard hat ball hat so he could go down in the pit with them. 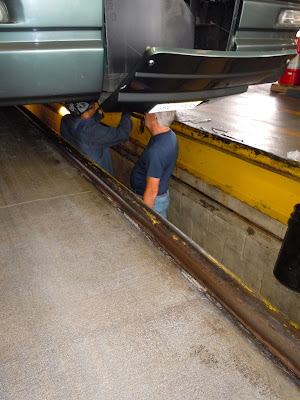 As some of you know ~ a few years back..Rick and I used to breed, show and raise golden retrievers-Speedco had this poster on their wall today and I just had to snap a shot of it~this boy looks just like our previous male stud boy Malcolm. Isn't that just the sweetest face..I teared up when I saw it. Mac used to do the cookie on the nose trick too. 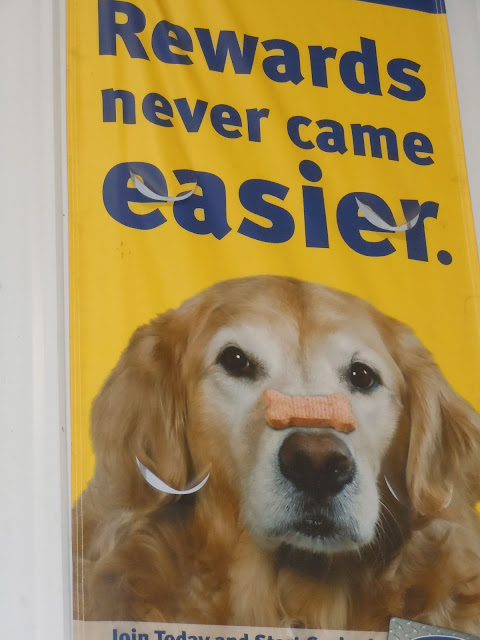 Once they were done all the work, we paid the bill with a smile, said so long to everyone and hitched the car back up and headed on down the road to Carlisle PA to a favorite park of ours for the night. Got setup, fed and took the furkids for a walk, then we hopped in the car and had supper over at the cracker barrel.
We are now back home..the fireplace is going..soft music is playing...the kids are sleeping on the sofa, Rick is mapping out tomorrow's route....I'm reading blogs and surfing...life is good.

Be safe out there folks

Home is where you park it...